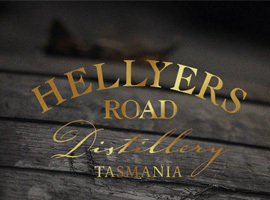 
Hellyers Road is Australia’s largest boutique distillery and the only distillery in northern Tasmania. It’s located in dairy farming country on the outskirts of Burnie.

Hellyers Road Distillery is part of Tasmania’s second largest milk processing company, Betta Milk, which is owned by local dairy farmers and descendants of the farmers who founded the milk cooperative in 1956. The distillery’s first flow of spirits was on January 29, 1999, and the first bottles were sold in 2006. In 2010, Hellyers Road was recognised by the Malt Whisky Association of Australia for producing the nation’s best single malt, and in 2012, the distiller released its first aged statement whisky – The 10 Year Original. If that sounds finely aged, it gets even better; Hellyers Road is set to release an even older whisky, The 12 Year Original, in 2014.

In addition to wowing Australian drinkers, the distillery has been exporting to Europe, with a shipment of single malts impressing the French. Hellyers Road Pinot Noir Finish was even voted ‘Best New World Whisky’ from a series of blind tastings conducted at the prestigious Whisky Live – Paris event in 2013.

Not bad for a company that started off in the dairy industry.