Home / Design & Construction / SEARCH FOR THAT NEW ADDITION TO YOUR HOME / 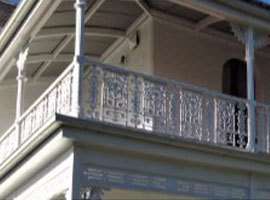 
Chatterton Lacework is a family business which began trading in 1946. It began trading as Chatterton Brothers in an old army hut at 493 Keilor Road, Niddrie in Victoria. Around 1965 the business was relocated half a mile up the road towards Bendigo at 583 Keilor Road, Niddrie, Victoria where it remained until 2004, some forty years later. It has since relocated to 43 Beverage Drive, Tullamarine, Victoria where it operates from today.

In those early years following the war the company, trading as Chatterton Brothers, specialised in drilling for water to be used in irrigation. Chatterton water bores are common in many southern New South Wales, Victorian and South Australian properties providing water for irrigation and livestock. Chatterton Brothers were also employed to do test bores for the King Street Bridge Melbourne development.

Chatterton water bores are still operational today at two sporting clubs in the western suburbs of Melbourne, Victoria to assist with irrigation during periods of drought. A legacy that will live on for many years.

A wrought iron manufacturing business developed as a result of the ongoing demand for steel casing to supply these water bores.During the periods when they were not manufacturing these incredible steel pipes to pump the water the opportunity arose for a manufacturing business requiring little material to utilize the abundant staff. It was at this time wrought iron gates, flywire doors, wrought iron security doors, fire place surrounds with the most amazing designs, balustrades and spiral staircases become common practise for many years to come.

Under the expert guidance of the late Lyall Chatterton the business grew into a large, well known business employing up to 35 staff members ably assisted by long time loyal staff members Otto Meilerts and Bohdon Wasyl.

Other products manufactured included a range of Kookaburra Letterboxes, an extensive range of gate and fence accessories and the traditional heritage lacework and balustrade panels used today in the restoration of Heritage homes Australia wide. A range of Victorian Restoration products including the reproduction of many old style and heritage lacework and balustrade designs has assisted in complimenting the extensive range of products.

During this period the company changed its name to trade as Chatterton Lacework as it is known today.