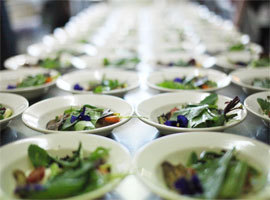 
The King Island Long Table grew from a very special wedding in 2003.

A local lad married his bride, with friends travelling from interstate and overseas. Many of the guests were strangers to each other. Led by their hosts they worked together helping each other to prepare for a wonderful wedding. They gathered ingredients and made preparations together. A shared camaraderie prevailed, bonds were forged and strangers became friends.

Several years passed and in 2008, our bride and groom, Cynthia and Paul Daniel reminisced about this special day with Melbourne chef Lucinda MacDougal. It was then that the seed for a King Island Long Table Festival was planted.

The first Long Table was held in 2009 and lead by Lucinda, catering for a small group of family and friends. Since then, Long Table has developed into a three-day event and draws visitors from all over Australia and the world.

The Long Table is run by a small team of local volunteers in conjunction with visiting chefs to display the best of local and Tasmanian produce. Past chefs include talents Stephen Russell and Nicholas Cooper, Melbourneís Pure South Dining and Tasmaniaís Bay of Fires Bush Retreats own Thomas Dicker.